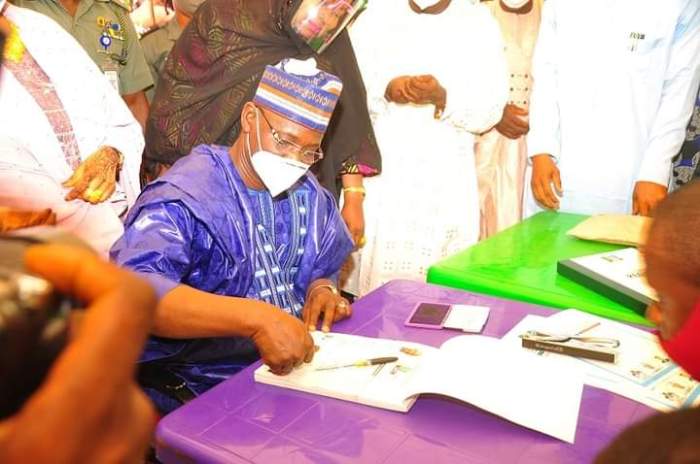 As the search for the national chairman of the All Progressives Congress (APC) intensifies, Nasrawa State Governor, Engineer Abdullahi Sule, has called on the country to be fair to both the defunct Congress for Progressive Change (CPC) and Nasarawa State.Engineer Sule made the call shortly after revalidating his membership card of the APC, at his Gudi Motor Park II polling unit, in Gudi electoral ward of Akwanga Local Government Area, on Tuesday.Tracing the history of the emergence of the CPC in Nasarawa State, the Governor pointed out that if Nigeria will be kind to the CPC, Nasarawa State is the place to look at.Engineer Sule specifically commended his immediate predecessor, Senator Umaru Tanko Al-makura, for bringing the CPC to limelight, with the party having only Nasarawa State as a bargaining chip during the merger that brought about the APC.”Senator Al-makura has made Nasarawa State proud, by being the only one to present a party to be part of that alliance,” he stated.For that reason, the Governor said he believed that, in any other way, if Nigeria would be kind to the CPC, then the country should be kind to Nasarawa State.Supported by two former governors of the state, Engineer Sule expressed satisfaction with the ensuing unity within the ruling party in the state, adding that the turnout during the flagging off of the APC membership revalidation, registration and update in Gudi, dispelled any insinuation suggesting there is any problem within the party.The Governor however reiterated his call on officials handling the exercise not to discriminate but to allow everybody to register.In separate goodwill messages, former governors of the state, Senators Abdullahi Adamu and Umaru Tanko Al-makura, highlighted on the unity existing within the party in the state, which they said, manifested from the love and support the APC enjoys in the state.Speaking at the event, Senator Al-makura said the tumultuous crowd that turned up to witness the event, was not only indicative of the support the party enjoys but that the people have taken the exercise with all seriousness.”You can see the exercise is very important. We must all go out to ensure the success of the party,” Senator Al-makura said.On his part, Senator Adamu commended the Governor for carrying everybody along in his administration and for spreading goodwill across the state.According to Senator Adamu, the turnout at the event, was ample evidence that the APC remains the party to beat in the state, if at all there is an opposition.Earlier, state Chairman, APC Caretaker Committee, Hon. John Mamman, urged officials of the party against circumventing rules and guidelines for carrying out the revalidation and registration exercise.Hon. Mamman called on the officials to see that the party’s register to be produced in the end, is a credible and reliable document that can stand the test of time.The caretaker chairman commended Engineer Sule for for the support given to the party in general, as well as in conducting the revalidation and registration exercise, assuring him of the party’s support in the implementation of his various peoples oriented programmes.