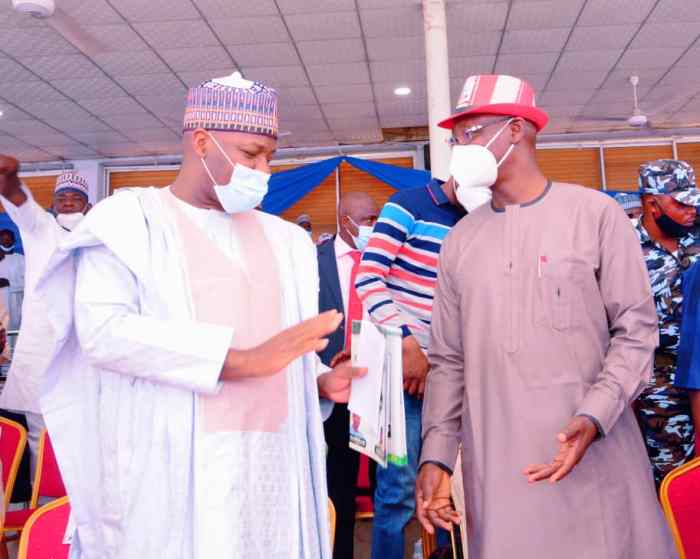 Former speaker of the Federal House of Representatives, Hon. Yakubu Dogara, has extolled the leadership qualities of the Nasarawa State Governor, Engineer Abdullahi Sule, stressing that with the type of leadership being demonstrated, there is no way the state cannot be among the first three states in the country.Hon. Dogara stated this while delivering a keynote address at a grand reception organized in honour of Dr. Joseph Haruna Kigbu, who returned to the All Progressives Congress (APC), along with 10, 000 others, at a ceremony in Lafia, on Saturday.Delivering his address titled “All inclusive Party Politics for Peace, Unity and Progress: the Governor A. A Sule Legacy”, the former speaker noted that with the existing peace and unity in the state, as a result of the effective leadership being provided by the Governor, Nasarawa State is heading to be among the top three states in Nigeria.”It’s only effective leadership that will deliver peace. It takes a leader only in the mould of Governor A. A Sule to recognize that we need peace and unity in order to make progress,” he stated.Hon. Dogara added that with the quality of leadership being provided in the state, Nasarawa State will realize her potentials.While appreciating Engineer Sule for demonstrating the kind of leadership that is investing in people, the former speaker recalled how the Governor spoke about the people of the state with passion, as well as the progressive agenda he has for the state.”With this kind of determination that places premium on peaceful coexistence of the people of this state and recognizes those who will help you achieve this agenda and bringing them into the fold, that is the only way you can deliver all the promises you made during your election,” he said.Speaking at the event, Nasarawa State Governor, Engineer Abdullahi Sule welcomed Dr. Kigbu and his friends back home.According to the Governor, nothing is making it possible for Dr. Kigbu, a former House of Representatives member, to return to the APC, which he helped build its foundation before leaving to the opposition party, other than justice, peaceful coexistence and mutual understanding that is presently prevailing across the state.Engineer Sule explained that since inception, his administration has been guided by the fear of God, as well as the need to ensure lasting peace and unity among the people of the state.According to the Governor, with the responsibility vested on him and as Governor of the state, he will carry every citizen along, irrespective of political believes or social status.On his part, Dr. Kigbu, while returning to the APC which he left to join the opposition Peoples Democratic Party (PDP), said his story was that of a prodigal son who only returned home after a long journey in the wilderness.He thanked the Governor for accepting him back into the APC alongside thousands of his supporters, promising to eschew politics of bitterness but to embrace progressive engagements.The event, which held at the Lafia Square, was attended by prominent politicians from within and outside the state, including two former governors of the state namely Senators Abdullahi Adamu and Umaru Tanko Al-makura.